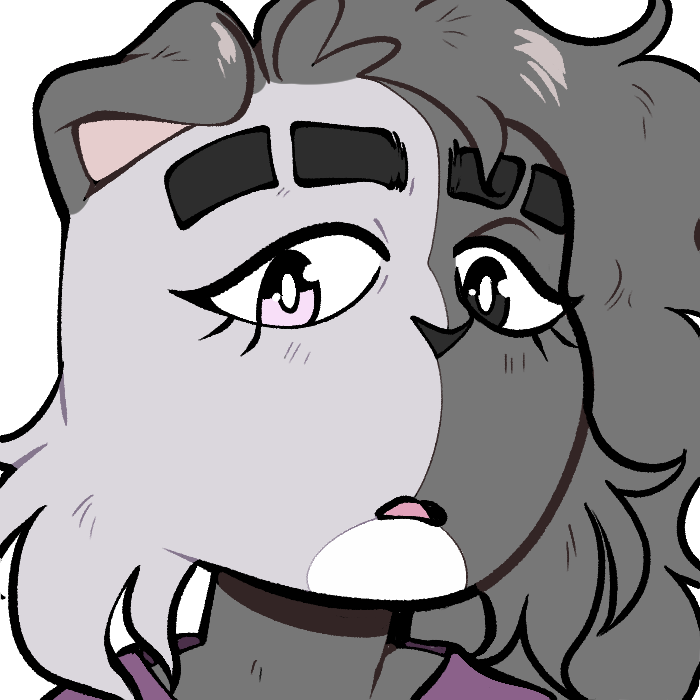 Status: Uncomfortable with the idea of dating.

Bio: Emily is the child of an exceptionally large and cultish family. Due to pressures from their mother, they were raised as a female despite their gender at birth. Emily considers gender to be arbitrary and meaningless, shying away from their family by engaging in self mutilation. They take any chance they can get to leave the house.

"I thought about curling them, but I think this matches my eyes and other features better."

"Why would you ask me a question like that?? The only outcomes are pain for you, or pain for me."

"Your piercing is soooo cool, where'd you get it?? Ever thought about getting ones around here."

"One is the worst number.. two is pretty bad too. I'm lukewarm up to around 17, that's where they start looking nice."

"Excuse me? You should try wearing something like this sometime. I bet you'd look nice" -to a stranger-

"He's kinda funky with my space? Like he wants something but he doesn't know what it is. Gives me the willies."

"His fashion sense..? Uuuh.. kinda conservative? He seems like he has a good eye though. I respect that."

"There was one time he asked me to.. " Chuckle "A few days after I thought it was funny, but at the time I wanted to kill him."

"She makes me question things sometimes and that freaks me out a little bit."

"I haven't really seen her that many times, but she seems fine."

"A normal looking mom I guess."

"Men that are that big? Usually not good people." Shrug

"Hard to tell, sometimes when he picks up Ian and Robyn he's loud. I don't like that."

"Sheeeee...makes me feel valuable. Like maybe there are things out there that are worth trying to achieve."

"She's REALLY bad at being her. Nothing I can do gets it out of her. I think she tells me the truth a lot, but wow.. who is she?"

"I worry about her a lot. I should probably worry about me more, but when you're around her all the time.. there's something really wrong."

"Nothing makes me panic more than hearing her voice.. My body feels like it's my heart and I..."

"I have 3 dads and 14 siblings other than me. I don't think I could comment on every last one of them. They're all horrible."

"My sisters are both freaks.. sorry. That's not nice. They're both really.. bizarre."