The lynx here is Nora's ex-boyfriend Benny! He would much rather you call him that than Benoit, everyone has trouble saying it anyway.

Anything reminding him of who he is and where he comes from is irritating. A rich boy from a rich lynx family. Being a lynx, you're in this weird middle ground where you can tango with the big boys but not quite be on their level and it makes him feel insecure. Interestingly enough, his only real friend is a tiger.

He's really condescending towards small cats, but has a huge fetish for domestic cats. Nora happens to be one of the most attractive ones he's ever seen. I'll have to go into his relationship with Nora in a different post, but he was an abusive asshole.

Robyn and Ian's grandparents are still alive. They visit both pairs equally.

The siblings' relationship with "Nana & Poppy": Robyn and Ian get along well with their mother's parents, soaking up their endless support and care. Elliot and Vivian are always desperate to see to them as their own children aren't around as much. They'll ask a million and one questions about how their grandkids are doing and what they're up to.

The siblings' relationship with "Gigi & PawPaw": It's...a lot more energy consuming to visit their father's parents. Other relatives are almost always around to add to it. They find the things their grandparents value arbitrary and confusing. Loving with an abrasive edge.

Nora's and Sam's relationship with their parents deserves a post or two on its own.

Uhh...I don't know much about Nora's brothers atm. They share their parents' passion for music and make a lot of it together. Especially in the bedroom.

They fuck each other.

Nora's not as close to them as she'd like to be. She's accepted a long time ago that they both have something that they'll never share with her.

I decided that Mirabelle and Thomas actually have three separate litters instead of two. The first and second litter were at most a couple years apart, the third aren't that much older than Robyn and Ian.

Mirabelle and Thomas inadvertently pick favorites among their children, creating tension between the siblings. The litters get along with their littermates in general though, except the middle litter.

Sam gets bullied by his sisters at varying degrees, but he'll do almost anything for them. He's big brother after all. 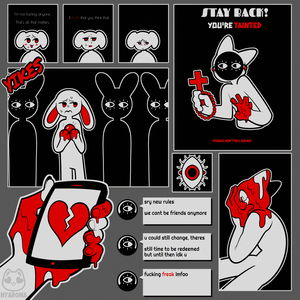